What is a red dot sight?

The red dot sight enables you much faster target acquisition compared to traditional iron sights. Instead of bringing the front sight, rear sight, and target to one plane, you only need to match the target and the luminous point.

How does the red dot sight work?

When compared to the traditional rifle scopes the most immediate difference that is noticed is the lack of magnification and simple construction of the red dot sights.

The first attempts to create a reflector (or reflex) sight are dated to the beginning of 20 century, but the invention of a practical red dot sight (or the acronym RDS) is credited to the Swedish optics company Aimpoint AB in the late 1970s. The first-generation Aimpoint red dot had a closed tube design and was marketed as the first "electronic" red dot sight originally meant for rifles.

Like all future reflex-styled sights, at the heart of the Aimpoint Electronic was an LED (light-emitting diode) and a reflecting curved mirror.

The main drawback of the early red dot sighs was large power consumption that could drain a battery in a few hours. But the ever-advancing optics technology has spawned off the lower power consumption LEDs and combining them with power-saving electronics, few manufacturers revolutionized the red dot reflex sighting industry. Now, new generations of red dot sights are offering much longer battery life, which is measured in years of constant-on use.

However, advanced electronics wasn’t the only development as these aiming solutions differ in methods of work. While the red dot sights refer to any type of sight that displays an illuminated dot or other shapes as the aiming point, there are three main types of electronic sights: prismatic sight, reflex sight, and holographic sight.

The prismatic sights are similar to traditional scopes as they usually come in a small tube-like body. Aside from their shape and design, prismatic sights instead of lenses utilize a glass prism (like binoculars) to focus the light on the window. 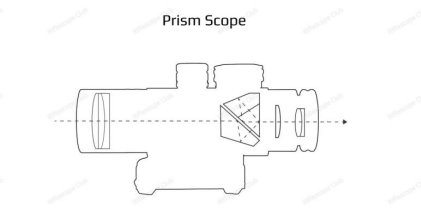 Nearly every prism scope has an etched reticle on the glass which can work without battery-powered illumination, but when it is illuminated it will give you the “red dot” effect.

If you looking for a magnified red dot sight, prismatic sights might be solution.

That said, the common characteristic of prismatic sights is fixed magnification which comes in various magnification configurations: 2x, 3x, 4x, or 6x.

Generally, these sights sport an adjustable diopter a great feature for people with astigmatism and for shooters who wear glasses.

Typically, the prism sights are equipped with a built-in Picatinny mount for easier use on multiple weapon platforms.

A reflex sight is the most popular red dot sight, and it is offered in two main construction forms that don’t look alike. You can find this kind of optic on the market as closed or open styles.

A closed reflex sight, due to a tube-style construction is the more traditional sub-category of the reflex sight. It has a similar shape to that of the prismatic sight or standard rifle scope. Even though with enclosed housings they may look similar these electro-optical devices might work slightly differently.

Featuring an open lens protected by a metal hood, the other type of reflex sights can be very compact and inexpensive. sometimes referred to as the ‘head up’ type, the open reflex sights provide a less obstructed field of view and boast unlimited eye relief and an unlimited eye box. 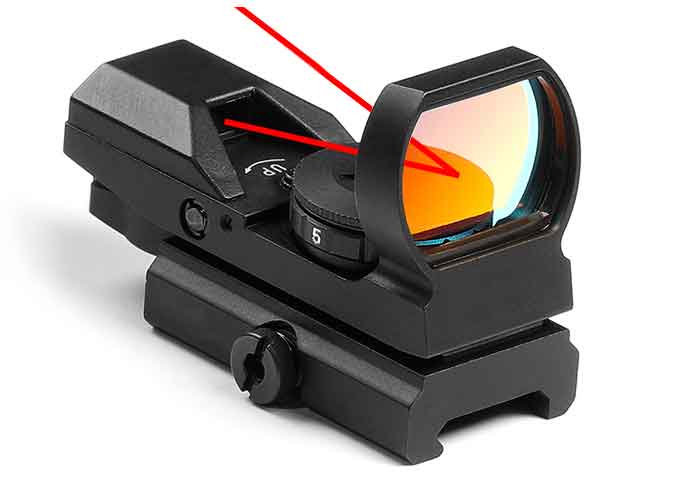 Though in the last couple of years LPVO optics (Low Power Variable Optic) seem to be all the rage in close combat arenas, competitions, and short-range hunting scenarios, the red dot sights are currently experiencing a renaissance, offering much more improved usability and compactness. Additionally, newer generation red dot sights come with an excessive battery life, often marketed in the years, allowing them to last up to 50,000 hours without being turned off.

Another common highlight of reflex sights is using them with both eyes open. That feature enables you to preserve both peripheral and spatial vision.

The reflex sight uses a simple LED as a source of light to reflect light off a slightly tilted spherical glass to create a reticle. The curved mirror has two functions.

One feature is to reflect the light for the reticle back to the shooter’s face. Secondly, the semi-transparent mirror is coated to reflect only the color of the emitted beam and allow all other wavelengths of light to pass through. In most cases, the reflex sights reflect the red spectrum and sometimes green or gold.

Instead of an LED source and a specially-coated spherical mirror, holographic sights utilize lasers and a series of mirrors to render a floating three-dimensional reticle in the window.

In a form of a sandwich, the set of lenses and a special film between them produces the holographic image of the chosen reticle in front of the shooter's eye like a hologram.

As a result, holographic sights project an incredibly crisp reticle onto a pane of glass with extreme sharpness.

In addition, you will not be limited only to a single dot, as these sights would provide you with reticles in a shape of a cross-hairs, chevron, or any other type.

In comparison to reflex dot sight, holographic sights are more durable and can withstand more abuse due to the thicker and tougher glass. Even with a glass window cracked or chipped, holographic sight can still project a reticle.

Since the system uses a laser diode to create a reticle, the holographic sights are almost immune to parallax distortion.

Similar to reflex sights, the holographic sight is a non-magnifying gunsight, but unlike them, the reticle of the Holo magnified red dot sight remains unchanged by external magnifiers.

Whatever red dot type you decide to mount on your firearm, rest assured that all of them make acquiring your target much easier and faster.

Some red dots can be quite inexpensive but electro-optic sights with the more complicated mechanism can cost twice to four times as much as a simple red dot sight.